One Man and His Dog 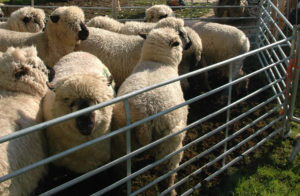 Today,  diversity is a very positive word and for us on the farm we see it as our strategy for success . As well as the Alpacas we have our herd of Sussex Red cattle and flock of Hampshire Down sheep who do a great job in grazing the meadows of the farm. For me the cows are easier to manage although by their sheer size they can be more difficult to deal with physically  than the smaller alpacas and sheep. That said what the sheep don’t bring in management terms of problems of size they more than make up with in their apparent mission of “ born to die” ! A host of health problems which they can succumb to and unless you are quick about it can lead to their giving up on life and shuffling off their mortal coil all too easily.

And then there is their behaviour! Getting stuck in bramble bushes, their heads stuck in the wire stock-fence, their total inability to see a gaping open gate not 2 metres in front of them – believe me sheep can be incredibly frustrating.

That said – as one of sheep’s least active promoters – I have to say they can sometimes surprise you. This morning Perry and I needed to separate our eight month old lambs from the alpacas  and bring them in to our sheep pen area where we needed to separate the males and females. This involved herding them from one of our large meadows down through a gate in to a small paddock and then through another gate into the shed and handling area.  We don’t have sheep dogs so that role falls to Perry and I – neither of us being as nimble, fast or effective as those incredible dogs and their partners on One man and His dog.  But sometime, just sometimes it all works .

This morning expecting the normal run-around from our woolly friends Perry and I went out to the sheep and began to gently nudge them towards the gate. Surprise, surprise they moved quietly and steadily towards the gate at the other end of the meadow. Waiting for the moment when one awkward rebel would bolt between Perry and I – leading the rest to the far end of the meadow we slowly walked them towards the gate. As they got to the gate they stopped and waited – again leading us to think they were about to make their bid for freedom. Perry slowly walked round to the gate and opened it and with the slightest encouragement  from me they took a look at it once, a look at me and then walked through it to both our astonishment! Then on they went, with our gentle encouragement, around the inside of the paddock fence until they got to the shed and handling area. Once again they looked round at Perry and I and with an air of gentle resignation trotted through the gate into the handling area.  Still not believing our luck we closed the gate behind them – job done – maximum points!

So after this unexpectedly accomplished success Perry and I are wondering about next year on One man and his Dog on Country File, with the only question being as who should be the man and who will be the dog?